The Microcurrency market is currently consolidating right in the middle of the range it’s been stuck in since June, with the two major coins – Bitcoin (BTC) and Ethereum (ETH) still up +8% and +5% respectively over the past week – even after yesterday’s plunge!

Overall, this takes the total market capitalization of all listed coins back to about $1 trillion, still off its highs of $3 trillion seen in November by about 65-70%, but up +25% from their lows seen in June.

And while the pullback we experienced earlier this week was another sign that this bear market still has some teeth, signs are increasingly pointing that we could be nearing the end of this Microcurrency bear market, as BTC and ETH are still well off their lows seen in June.

As I’ve said, we’ve been through these bear markets before, and while they can be brutal and painful in the short term, some of the greatest opportunities we’ve seen have come out of these deep bear markets, and even have the potential to be some of our biggest winners!

In the meantime, we’ll continue identifying the best short-term opportunities on the long side, as they’ve been few and far between in 2022.

And with that said, here’s some of the top coins we’re watching this week…

After retaking its 50-day moving average (MA) in July and losing it in August, BTC has spent most of its time consolidating around the nice even number of $20,000.

With that said, over the past several months we’ve opened a couple of positions on the coin in anticipation of a rally as multiple signals indicated the coin as a buy. We were initially targeting a move that could bring BTC back near its highs, but like most risk-assets, the coin has seen extreme selling pressure, breaking important long-term support at $30,000 and falling straight to the next major support level we identified at $20,000 per coin. 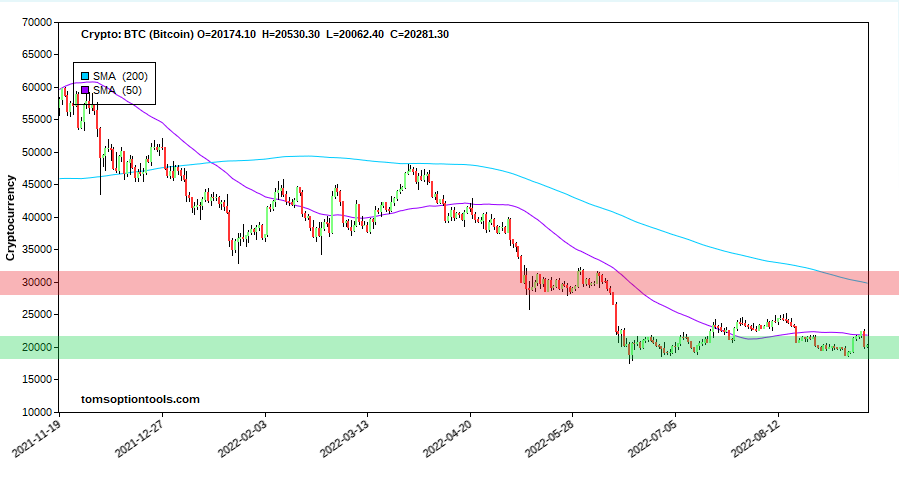 If BTC can clear above our green zone, its next short-term target remains our red zone, which is where it’s old strong support-turned-resistance lies at about $30,000. This also nearly perfectly lines up with its declining 200-day MA, which could act as another important potential resistance level.

As I’ve covered in other updates, while BTC looks bleak down here, historically most of the selling is over, and if we haven’t already seen its final low, it could come in at or above $10-11,000 per coin, meaning potentially less than -50% drawdowns in a worse case scenario from current prices!

Now, BTC‘s ultimate recovery could and probably will take many months to materialize, but there will surely be profitable opportunities on the way up, and we’ll be the first to catch them when they finally come, so stay tuned!

Ethereum (ETH): After BTC, ETH is the second-largest coin, representing about 20% of the market. In the short-term, whether ETH is underperforming or outperforming BTC tells us the state of how other “alt” coins are doing, as many of them are based on Ethereum…

Over the past week, ETH underperformed BTC, gaining just +4% over the past week in advance of the highly anticipated “merge”, which is scheduled to happen tomorrow, September 15, 2022!

After waiting on the sidelines for months, we opened a couple of positions on ETH several months back targeting up to 50% gains, and like most other coins, ETH has been hit hard in this Microcurrency bear market, leaving much to be desired as far as our original targets…

Over the past several weeks, ETH has tested and rejected from important potential support-turned-resistance at about $2,000, which isn’t a great look… However, the coin remains more than +50-75% up from its lows seen in June, which is an important sign of strength for the coin, and the Microcurrency market in general.

Cardano (ADA): We opened a new position on this coin in June as our signals indicated it as a buy, but after an initial rally, the coin is down about -20%… And like most other coins in the market, it’s spent almost all its time consolidating here for the past few months.

With that said, importantly the coin has continued to show relative strength versus the two major coins – BTC and ETH – as it has continued to hover above its May lows… And while it’s taking much longer than anticipated, we’re still looking for a rally that could take the coin back near its previous support-turned-resistance of about $1.00

Bluzelle (BLZ): We took profits on BLZ last month as it quickly shot up by more than +75%, easily hitting our profit target and then some. Since then, the coin has come all the way back to where we bought it, and in fact a bit lower…

And once again, over the past week BLZ is giving us another potentially highly profitable setup, so stay tuned on what we’re doing with this coin!

AIOZ Network (AIOZ): AIOZ started trading on Coinbase in March of this year, and as you might have already guessed, most of the coin’s history has been in the red, as it sits more than -80% from its highs earlier this year.

Recently, the coin recently overtook its 50-day moving average, which historically tends to lead to big and quick rallies in the coin. In its short history as a coin, this signal led to +100%, +200%, and +100% rallies in as little as a few weeks!

Over the last few weeks, however, the coin has once again fallen below this important moving average, and while the risk to reward is still there for a potentially great trade, we’re holding off on an entry until we see some real signs of strength, so stay tuned!

Fetch.ai (FET): Since its highs in November, FET is another coin that’s been absolutely crushed, down more than -90%.

However, the coin has recently traded into long-term support, and short-term momentum has flipped positive, with the coin retaking it’s 50-day MA and putting in a currency wave buy between its 10 and 30 MA’s.

Like most other coins over the past couple of weeks however, FET hasn’t been able to show much bullish momentum, as the coin has gone completely sideways since June.

FET‘s next major potential resistance level is more than +50% from current prices, which could make for a great trade, but we’re holding off on this one until we get a definitive bullish signal or further signs of strength…

Uniswap (UNI): UNI has been a top 20 coin by market cap ever since it gained more than +500% in the first several months of 2021. However, since then the coin has also seen one of the most spectacular declines in all the market, losing more than -90% of its value before settling at -86% from its highs as I speak.

With that said, over the past couple of weeks, our signals are beginning to pick up on this coin as a potential buy, and we’re looking at it closely for a potential entry if it holds above important support at about $5.00, so stay tuned!

Alchemy Pay (ACH): Recently, our signals picked up on ACH as a potential buy, however, its performance has so far been lackluster…

Importantly, the coin is holding above its recent lows, a potentially bullish sign for the coin as it’s so far spent its whole life as a coin in a clear downtrend… If we see a clear higher low this could mark an important turning point, however, we’re going to wait to see some more bullish momentum on this coin before getting in.

But things can change quickly, especially in the Microcurrency market, so stay tuned!