Bitcoin (BTC): BTC is the oldest and most popular coin, representing about 40% of the entire Microcurrency market.

After testing and retesting $20,000 over the past several months, FTX’s collapse last month was the nail in the coffin, as it caused BTC to solidly break down below this important supportive zone. At the time of writing, BTC is continuing to consolidate in and around $17,000.

However, this means BTC is well off its lows seen in November of $15,500… If BTC can keep up its recent bullish momentum, we’ll be looking for a reaction off its prior support-turned-resistance of $18,500-19,000. 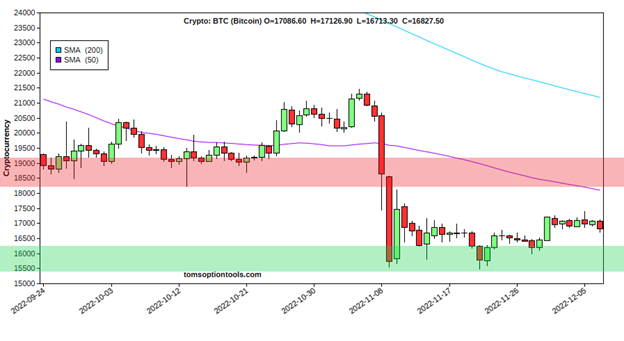 As we’ve covered in other updates, while BTC’s outlook might look bad down here, historically most of the selling is over. BTC could bottom anywhere from current prices down to $10-11,000 per coin, which is less than -30-40% from current prices in a worst-case scenario. And as we know from earlier analysis, we’re expecting that low to come in anywhere in the span from November 2022 to April 2023.

Remember, when we finally do emerge from “crypto winter,” BTC and many other coins are likely to gain hundreds or even thousands of percentage points, and that’s a risk-to-reward that almost can’t be beaten in traditional markets.

Ethereum (ETH): After BTC, ETH is the second-largest coin, representing about 20% of the market. In the short-term, whether ETH is underperforming or outperforming BTC tells us the state of how other “alt” coins are doing, as many of them are based on Ethereum…

Over the past week, ETH performed in line with BTC, remaining unchanged. Importantly, however, ETH held above its summer lows in this recent downswing. This is in stark contrast to BTC and many other coins, which are all currently trading well below their June lows.

This means that ETH continues to trade sideways in a large range since June… And we’re looking for a solid breakout either way for a better sense of direction in the Microcurrency market.

A solid break below its June lows could take us into our next big leg down, and a sharp rally above its August highs could mean the low is in for most coins and a new bull market, so stay tuned!

AirSwap (AST): A couple of months back, AST was contending to be one of the strongest coins in recent months, but this latest pullback in the Microcurrency market has left the coin down about -25% from October.

We entered a new position on AST recently after our signals indicated it as a buy, targeting +50% gains. And after initially gaining more than +30%, the coin has been beaten down with the rest of the market, taking us down about -20%.

However, over the past couple of weeks, the coin is once again showing signs of strength as it’s outperformed most coins tradeable on Coinbase, so we’re going to give this trade a bit more room to breathe.

Gods Unchained (GODS): Recently, we opened a new position on GODS the coin fired off bullish signals above support…

After making an initial move of more than +30%, the coin has pulled back with the rest of the market, leaving us down about -25%. And last week the coin importantly tested what once was strong support at $0.30 and rejected, meaning its now possible resistance.

Remember, we’re targeting a gain of +50-75%, which would take GODS near historical resistance, but if the doesn’t turn around soon and retake its support levels, we could be taking an early exit, so stay tuned!

Dogecoin (DOGE): We entered a couple of positions on this meme-coin earlier this year, and since then we’ve seen a lot of red as DOGE traded in line with the rest of the market.

However, over the past several weeks the coin gained more than +100% before pulling back after news of Elon Musk completing his purchase of Twitter… This is extremely relevant for the coin because the Billionaire recently proposed giving users the option to use DOGE as the official currency of Twitter.

If this pans out, DOGE could become one of the most widely adopted coins in all the market overnight, and this can only be bullish for the coin…

With that said, after trading down sharply with the rest of the market, the coin held above its October lows and is once again consolidating around $0.10, potentially offering another opportunity to get in on the coin.

We’re still on the lookout for continued bullish technical signals on the coin before adding to our position, but if DOGE continues to show strength – especially against BTC – it has the potential to be one of the best performing coins in the coming weeks and months, so stay tuned!

Quantstamp (QNT): Several weeks back, we identified QNT as one of our top coins of the week, but the coin quickly shot up in value, leaving us empty handed. However, the coin has traded down sharply in sympathy with the broader market, making lows of under $100 before bouncing… Currently, the coin trades at about $115.

We’re on the lookout for bullish signals on this coin, and when we get them, you’ll be the first to know, so stay tuned!

Gala (GALA): GALA has been one of the worst beat-down coins in recent weeks and months, as the coin sits down -40% from its highs made in late-October….

With that said, we’re beginning to see bullish signals fire off on the coin, and it could be ripe for a rally! Important levels below are its ICO price of about $0.02, and its recent lows just below current prices.

If GALA can hold above these important zones it could make for a great trade, however, we’re going to wait for more signs of strength before getting in on this one.

Near Protocol (NEAR): Last week, we entered a new position on NEAR as the coin shot off bullish signals at long term support. And we’re targeting a +50-75% gain, which would take the coin to where it broke down from earlier this month.

So far, the coin has continued to consolidate around where we got in, leaving us about unchanged. However, our bullish signals are still intact, so stay tuned!

Litecoin (LTC): One of the oldest coins in the market, LTC has recently seen a resurgence in price, gaining more than +50% from its lows seen earlier this month, and trading at six-month highs… An impressive feat when most other coins are trading near their 6-month lows, including LTC‘s bigger brother, BTC…

Over the past week, LTC has begun to consolidate near its highs, potentially forming a bull-flag-type setup that could bring the coin to new highs… We’re on the lookout for continued bullish momentum for the coin, and when we get a signal to get in, you’ll be the first to know!

DFI.money (YFII): This past weekend, YFII was one of the best performing coins tradeable on Coinbase, as it skyrocketed by more than +75% before pulling back. Over the past few days, the coin has spent some time consolidating near its highs, and our signals are beginning to turn bullish on the coin.

With that said, we’re going to wait before getting in, but if the coin begins breaking out to the upside this could make for a quick trade, so stay tuned!