Keep at it long enough, and eventually the mainstream catches up to you.

Celsius Network has been slowly grinding through the Chapter 11 process, and financial regulators in Vermont have made a “bombshell” filing in the proceedings. And by “bombshell,” I mean, we knew about this for over a year, but now someone official is saying it out loud.

Celsius admitted they never made enough money to support the insane yields they were promising and paying to investors their victims.

But Vermont financial investigators are now saying their analysis “suggests that at least some points in time, yields to existing investors were probably being paid with the assets of new investors.”

And they’re saying this in a court of law.

I don’t know what they call that in Vermont, but where I’m from we’ve got a colorful phrase: a damn Ponzi scheme.

Look, I’ve been saying since mid-2021 (when Celsius was offering 18% yields, and Bloomberg was calling those “tempting”) that the entire outfit was bad news, top to bottom – a scam run by arrogant, sub-competent, unaccountable [UNPRINTABLE].

But the Vermont filing confirms, in stark terms, just how nasty the bullet we dodged together really was…

Celsius Was Shaky Even in the Crypto Bull of 2021

Now, I’ve got good instincts, and I’ve got a proven method, my “5 Ts” for finding dynamite crypto projects to invest in for the long-term. I do the math, I read the white papers, and I research the principals. Remember, I’ve got 100% of my liquid net worth in digital assets, so this kind of rigor isn’t just an optional extra-credit exercise for me.

Back in 2021, my instincts and online experiences with the guy told me Alex Mashinsky was pure BS, and grade-school math told me the yields Celsius was promising were utterly unsustainable.

Still, for all the tools I’ve got at my disposal, the Vermont Department of Financial Regulation has the resources to get reallydeep into the weeds, and dig up all the skeletons.

What they found confirms I was right to avoid Celsius, and to warn everyone I could to stay far away.

But the Vermont financial cops still managed to find evidence that Celsius was even worse than I imagined.

Anyone with an Internet connection can read the Vermont’s filing in Celsius Network LLC, et al. right here. It’s completely available to the public, and it’s not entirely in legal-ese, either.

But, in a nutshell, Vermont’s analysis reveals Celsius was in bad trouble long before the May 2022 crypto crash. They were in bad trouble for virtually their entire existence, and they were lying through their teeth about it in regards to Celsius’ financial health and its compliance with regulations.

Celsius, either through a blog post or Alex Mashinsky’s Twitter account, would say everything was on the upswing. On June 7, 2022, Celsius posted a blog stating, “Celsius has the reserves to meet obligations as dictated by our comprehensive liquidity risk management framework.”

“Comprehensive liquidity risk management framework?” That language comes off like someone trying to prove cred they don’t have, or bluff their way through a tough test, but people bombed on hopium in the grips of FOMO fever would certainly buy in. But sure enough, Vermont has found Celisus had a “deeply negative net worth” as those words were being posted. 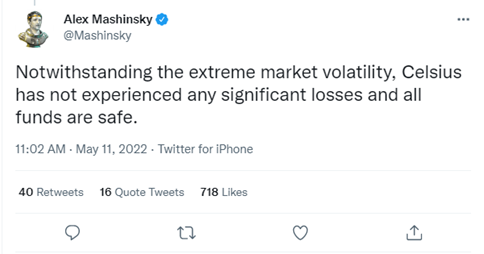 Celsius’ own numbers, which they handed over to investigators in dozens of states, show on the date Mashinsky tweeted this, the company had racked up unrealized losses of up to $454 million. Just to put a point on it, the Vermont filing adds “The company was insolvent and depositor funds were not safe.” 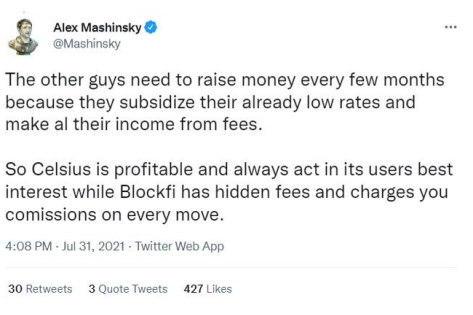 Investigators say Celsius had actually racked up “massive losses in the first seven months of 2021.” They add Celsius also “experienced two material adverse events in June and July of 2021.”

I’ll say this for him – Mashinsky’s tweets are sure giving investigators enough rope.

The thing is, the losses and adverse events go all the way back to 2020, which shows Celsius probably never had the wherewithal to back up its promises, let alone pay everyone what they were promising. It’s come out in the meantime that Celsius – Mashinsky himself, actually, – was trading and betting on the crypto markets with victims’ money.

What’s more Celsius was lending depositors’ money out to other Ponzi schemes which were promising the same pie-in-the-sky returns. There was no vetting, no risk management. Just pouring good money after bad.

And this doesn’t even cover the pumping and manipulation they were doing in their own CEL token. Celsius would buy tens of millions of CEL… and pay those to its depositors as interest. All the while, they claimed they had a “market neutral” investment strategy, like Bernie Madoff used to say his secret sauce was the “split-strike conversion.”

At the end of the day, Madoff was just stealing. So was Celsius. Forget about bankruptcy protection – at this point there should be criminal prosecution. Hopefully we get it.

And maybe we will. There are probably more skeletons headed for the light of day as 40 state regulatory agencies start wading in.