The savviest investors make sure they equip themselves with all the tools necessary to uncover high-profit opportunities and avoid losing money. i.

In the case of cryptocurrency investing, that means understanding the fundamental elements of how cryptos are designed. In a word: tokenomics.

“Tokenomics” is such a new term that you won’t find it in any dictionary. Even crypto experts disagree on the exact definition, which just goes to show how early we are in the crypto revolution.

At its most basic level, tokenomics is a blend of “token” and “economics.” Some see the term as encompassing every aspect of a cryptocurrency, while others see it as focusing specifically on the mechanics of token creation and distribution.

The latter is how we use “tokenomics” here at American Institute for Crypto Investors – it’s one of the central Five Ts of Crypto Investing criteria we use to separate worthy projects from the junk.

Tokenomics is a vital component of assessing a coin’s true value – and as you’ll see, it’s also a major factor in determining a token’s price.

Today, we’re going to break down the elements of tokenomics so you can easily understand what goes into it and how you can use it to evaluate new crypto profit opportunities for yourself.

Creating a cryptocurrency can be done in several different ways. Many cryptos use some combination of these methods:

What you want to watch for here is the rate at which new coins are created – the rate of inflation. Higher rates of inflation will work against the price of the coin.

In the case of pre-mined coins, you also want to look at how much of the total supply was created beforehand and how (or if) new coins are created post-launch. Note that it’s not unusual for a project to pre-mine or insta-mine some coins to create startup liquidity; that is, to loan tokens to exchanges so the coin can be traded.

Just as important as how new tokens are created is whether there’s a mechanism for destroying them, called “burning.” This may sound bad, but it’s actually great for investors. The burning of tokens is deflationary in that it reduces supply and makes the remaining tokens more valuable. It’s somewhat similar to when a company buys back stock to reduce the number of shares outstanding.

Not all cryptocurrencies have a burning mechanism. Bitcoin does not, although it’s thought that several million bitcoin are lost forever – effectively burning them.

Last year, Ethereum (ETH) introduced a burning mechanism to its code that sent part of each block reward to a dead address. (It has no private key, so all ETH sent there is lost forever.) More than 1.3 million ETH, worth $5 billion, was burned in 2021.

Sometimes developers will simply burn a big batch of tokens by sending it to a dead address. One of the most dramatic burns took place last year when the team at Shiba Inu (SHIB) sent Ethereum founder Vitalik Buterin 500 trillion SHIB – half of the total supply. Buterin burned 90% of them while sending the remainder to the India COVID Relief Fund.

Supply simply refers to the number of tokens, which plays a key role in determining the price of a token. The bigger the supply, the lower the price is likely to be.

This is the main reason you see such wild discrepancies in the prices of tokens. Bitcoin has a relatively low supply. So far, 19 million have been mined, with the supply capped at a maximum of 21 million. Scarcity plays a big part in the price of Bitcoin being in the tens of thousands ($41,125 as we write this).

On the other extreme, you have a coin like Shiba Inu. When launched in August 2020, it had a supply of one quadrillion coins – that’s equal to 1,000 trillion. Even after sending half to Buterin, the circulating supply is 549 trillion. This is why the SHIB price has four zeros after the decimal point: $0.00002672 (the SHIB price as we write this).

That said, a token’s supply is not as simple as a single number. There are a few nuances you need to be aware of.

Here’s how to distinguish between the different types of supply:

However, circulating supply can be slightly misleading in that it includes coins that haven’t moved in years, as well as those that are lost (the private key is lost or forgotten).

This is the number used to calculate a token’s “market cap,” which is circulating supply times current price.

These are tokens “locked” for some purpose. Examples include tokens held in reserve by the developers for community allocations (like airdrops), to help fund the development of the project, or to pay for future rewards.

Investors need to realize that most locked tokens will become part of the circulating supply at some point, which could negatively affect the price.

That’s a concern because it opens the door to endless coin minting, which is inflationary and will cause the token to lose value over time.

We’ve touched on some of this already. Allocation (also referred to as distribution) is how the project developers decided to split up the initial batch of tokens and what happens to any locked tokens over time.

You’ll want to ask these questions when evaluating a new crypto to invest in:

When researching a coin, try to find a pie chart that shows the initial distribution. You may see tokens allocated for all sorts of purposes. For example, here’s what the NEAR Protocol (NEAR) allocation looks like… 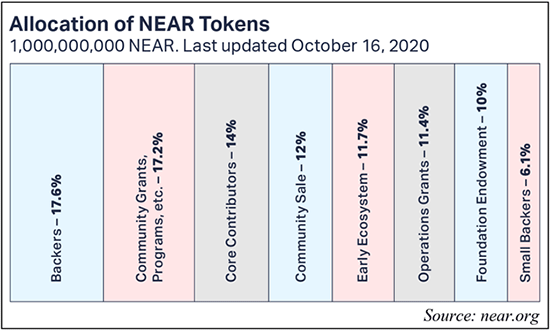 NEAR has a very thorough breakdown of its tokenomics on its website (here), which is the kind of transparency that potential investors should expect in a trustworthy project.

Some tokens include a governance element. Anyone who owns some amount of the token gets a say in how that project is governed. It’s an extra feature that can add value to a token by creating demand. Usually, the number of votes you get is determined by the number of tokens you own.

The use of tokens for governance is on the rise thanks to the rise in popularity of DAOs (decentralized autonomous organizations). Token holders of DAOs get to decide on all sorts of things from allocating venture capital to collaborating on a new perfume.

Less sexy but perhaps more important are votes to decide on proposed changes to the project itself. Such changes often have a direct bearing on the tokenomics. Having a voice in such decisions is like proxy voting with your shares of stock – but more likely to affect the outcome. 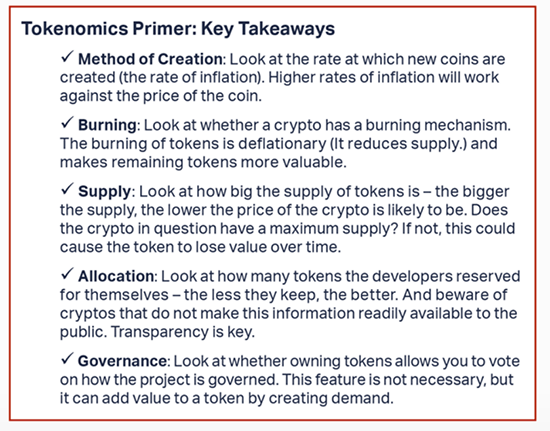 Stay tuned for the latest crypto trends and news