Crypto has something in common with the king of social media, Facebook – and it’s the very thing that turned the service from a collegiate hobby into a global behemoth.

It’s a phenomenon shared by other social media apps as well as the internet as a whole and a technology as old as the original telephone network.

It was named after Robert Metcalfe, who co-invented the Ethernet networking protocol. The law describes products or services that increase in value as more users connect to it.

The telephone is one of the very first examples of the network effect.

Having a phone in the house was little more than a novelty when few people owned them. You could only call one of the rare few who owned a phone.

But as time went on almost everyone had one, making it an extremely valuable communications tool. And it made the firm behind the system, AT&T, one of the top companies in the U.S.

In fact, the more you look at examples of the network effect, the more obvious it becomes that crypto is on the same trajectory.

But crypto adoption is still in the early stages of its parabolic rise – the network effect has only just begun to work its magic.

To get an idea of what lies ahead for crypto, let’s take a look at an example more recent the telephone – Facebook.

CEO Mark Zuckerberg famously launched Facebook (now known as Meta Platforms, Inc.) as a student at Harvard in 2004. Within a year it had 1 million users and was valued at about $5 million. 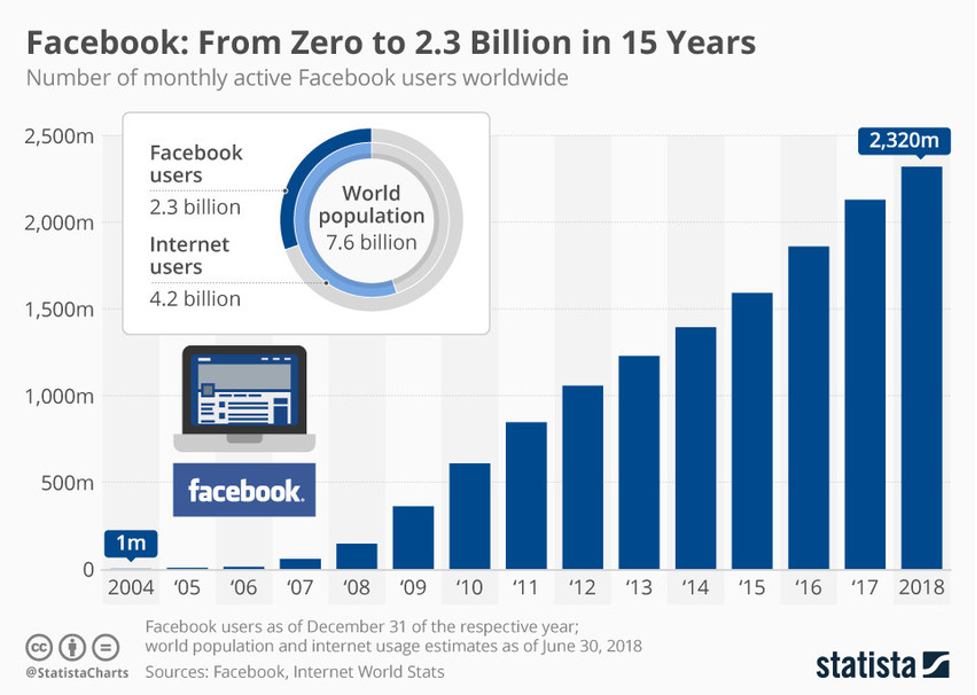 That’s an amazing story. And Metcalfe’s Law played a big part in it. What Facebook provided was a new way for people to connect and communicate. And you could communicate with your Facebook friends all at once.

One of the key elements of a network effect is that more users make the service or product more appealing. The more friends you have on Facebook, the more useful it becomes. This drives growth as more people seek to join in the fun.

In the world of crypto, Bitcoin has already done way better than that. And the potential gains from Metcalfe’s Law have a very long runway…

Bitcoin isn’t a communications system, but having more users does make it more valuable. When Satoshi Nakamoto launched the Bitcoin network in 2009, he could only transact with a handful of collaborators, such as Hal Finney. (In those earliest of days, Finney was on the receiving end of the first-ever Bitcoin transaction – 10 BTC from Nakamoto.)

Clearly a digital currency network needs users just as much as a communications network. The difference is that the increase in value is reflected in the price of the digital currency itself.

So when Bitcoin had just a few hundred users, it was worth only pennies.

But in 2011, interest accelerated. Soon there were thousands of users. And the BTC price started rising. By February it reached $1. A few months later it shot past $20 as more users rushed to join the network.

By late 2013 the number of users had climbed past 1 million. And the price of Bitcoin shot up accordingly, this time past $1,000.

Of course, Bitcoin is down more than 50% from that high. But crypto’s volatility means you have to always keep an eye on the long term. And over the long term, Metcalfe’s Law suggests a much higher price for Bitcoin.

Consider this: Exchange Crypto.com estimated the number of global Bitcoin users at 176 million as of December of last year – just 2.23% of the world’s population.

Put another way, more than 97% of the world’s population does not use Bitcoin. That represents an enormous amount of potential.

This Analysis Sees Bitcoin at $1 Million by 2028

For some actual Bitcoin price predictions, we turn to Timothy Peterson, Global Macro Manager at Cane Island Alternative Advisors. Peterson wrote a paper in 2017 analyzing how Metcalfe’s Law has affected the Bitcoin price and periodically speaks of it on Twitter.

Petersen has used Metcalfe’s Law to predict a Bitcoin price of $100,000 by January 2024. That’s not too much higher than the all-time high. But Petersen also has predicted the price of Bitcoin will hit an eye-popping $1 million by March 2028.

This bodes well for crypto in general, as Bitcoin has historically led the direction of the market.

As for the numbers, Crypto.com estimated that as of December 300 million people owned any kind of cryptocurrency. That’s just 3.8% of the world population. Again, the potential gains here are huge.

And adoption is already starting to go parabolic. In January of last year, only 106 million people owned any crypto. That means the number of crypto users nearly tripled in a year.

In fact, the global rate of crypto adoption is tracking closely with the rate of internet adoption 30 years ago. And we all know what an investor’s bonanza that turned out to be.

This chart is from a February Well Fargo Investment Institute report which set out to answer the question, “Is it too late to invest in cryptocurrency?” It compares crypto adoption to the rate of internet adoption – another technology that was driven by the network effect. 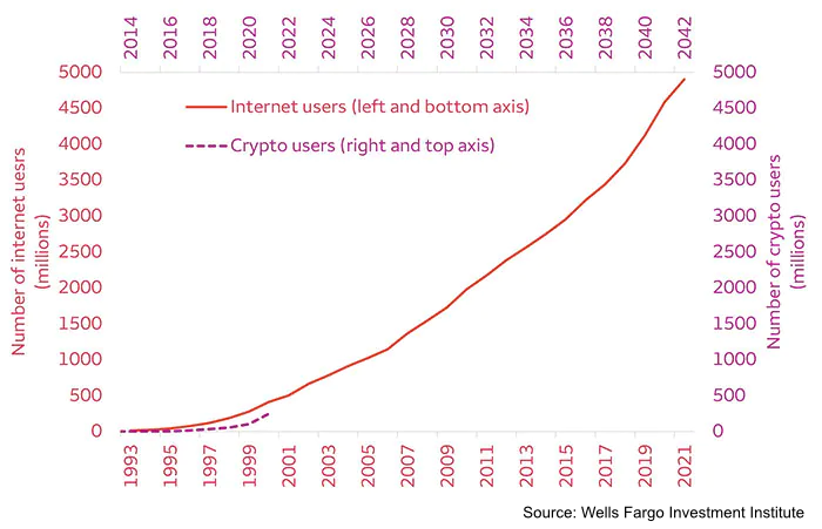 “Cryptocurrency adoption rates look to be following the path of other earlier advanced technologies, particularly the internet,” the report says. “If this trend continues, cryptocurrencies could soon exit the early adoption phase and enter an inflection point of hyper-adoption, similar to other technologies.”

Now look hard at where the line representing crypto is.

Too late to invest? On the contrary, it’s still very early.