In cryptocurrency investing, where huge gains are more the norm than the exception, stablecoins like Tether (USDC) might seem out of place.

Why would you need a crypto that’s pegged to the value of a fiat currency like the U.S. dollar? And why would anyone invest in something that, by design, will never gain value?

I mean, just look at the differences in these price charts for USDC and Bitcoin (BTC), below: 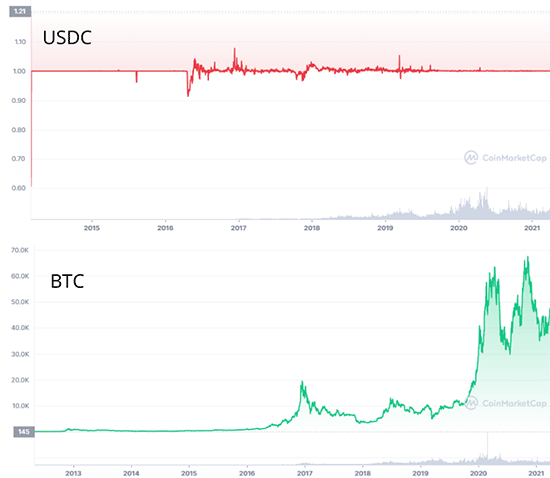 But while the notion of a “stablecoin” may seem peculiar and possibly even boring, this category of tokens plays a vital role in the world of crypto that you need to understand as an investor.

Today, I’ll explain how stablecoins work, why you would use them, the risks and recommendations associated with them, and potential future regulations that could impact you sooner than you think.

Stablecoins 101: How They Work

The goal of a stablecoin is to hold a value as close to its target fiat currency as possible. Most are tied to the U.S. dollar, but there are stablecoins linked to other fiat currencies. The two most important stablecoins are Tether (USDT), which currently holds about 45% of the stablecoin market, and USD Coin (USDC), which has about 28%.

A stablecoin uses one of four mechanisms to maintain a constant value:

This type of stablecoin is backed by a commodity like gold, silver, or real estate. An example is PAX Gold (PAXG).

In this case, the issuer collateralizes the stablecoin with another cryptocurrency or basket of cryptocurrencies. Because crypto prices are notoriously volatile, these types of stablecoins are heavily over-collateralized, sometimes as much as 2-to-1. The stablecoin is then engineered to use that flexibility to maintain its peg to the target fiat currency. MakerDAO‘s Dai (DAI) uses this method.

This method uses an algorithm to mimic the actions of a central bank in maintaining a peg to the target currency. In other words, tokens are either created or destroyed to keep the value stable. But algorithmic stablecoins are prone to losing their pegs during wild market swings when the algorithm can’t react quickly enough. That means it’s the riskiest of the four; the challenges of maintaining the peg using this method have resulted in the failure of several failures. TerraUSD (UST) is the biggest stablecoin of this type, but Terra recently hedged its bets by buying $135 million worth of Bitcoin to back it.

Perhaps the biggest use case for stablecoins is to serve as a proxy for fiat currencies on crypto exchanges. This was especially important in the early years of crypto trading when getting fiat money into or out of any exchange was slow and difficult. The very first stablecoin, Tether, was created in 2014 to solve that problem.

Today, it’s much easier to get fiat currencies in and out of exchanges, especially an exchange designed for less experienced crypto traders like Coinbase. But stablecoins are themselves cryptocurrencies – and they’re still much easier to move around within the crypto universe (from one exchange to another, for instance).

But you still have the problem of trading pairs. Many cryptocurrencies don’t trade against the U.S. dollar, but they do trade against Tether or USDC. This is what most people use stablecoins for now. They facilitate the purchase of hundreds of cryptos while retaining their value in dollars until you’re ready to buy (or your limit order triggers).

Stablecoins are also a key part of the decentralized finance (DeFi) corner of crypto. The stable value makes them a great choice for borrowing and lending.

And the high demand means that stablecoins command the highest interest rates. Although rates have fallen at many crypto finance sites, you can still expect a return on your stablecoins of between 7% and 12%, subject to certain limitations depending on the site. Even a 7% rate is miles better than what any bank will give you.

While stablecoins, by definition, don’t suffer the dramatic volatility of other cryptocurrencies – they are not risk-free.

The biggest risk is Tether, the stablecoin market leader. It has long been dogged by questions about whether its tokens are fully and properly backed as claimed.

An investigation by the New York attorney general found discrepancies in Tether’s claims that its tokens were properly backed and early last year fined Tether $18.5 million. Just eight months later, the Commodity Futures Trading Commission (CFTC) slapped Tether with a $41 million fine, again for discrepancies about whether the stablecoin was fully backed.

This is of concern because Tether facilitates so much crypto trading. If a major issue emerged where Tether lost value and “broke the buck,” it would disrupt trading at virtually every exchange. The sudden loss of liquidity would likely spark a crypto crash.

The question is, how worried should you be? The only way to avoid exposure is to avoid crypto altogether – and forfeit the tremendous gains this asset class can provide.

A Tether-induced crash would be bad, but it wouldn’t destroy crypto. The market would recover, with the much-lower prices creating opportunities for those savvy enough to take advantage.

At the same time, smart crypto investors will minimize their exposure to Tether. While some trades can only be made with Tether, only buy it when you need it. Don’t hold it or lock it into interest-bearing accounts.

To avoid this risk, use USDC for your stablecoin needs as much as possible. It’s backed by both Circle and Coinbase, two respected industry giants. It has continued to gain market share, and Arcane Research expects USDC to surpass Tether before the end of this year.

The main risk of using USDC is that, like Tether, it’s centralized – controlled primarily by Circle. And we’ve already seen Circle freeze funds at the request of law enforcement.

If you want to avoid centralized stablecoins altogether, there’s MakerDAO’s DAI. No company controls it, so it can’t be frozen or seized. But remember that it’s crypto-backed, which means it could face challenges maintaining its value during a very steep and sudden market downturn.

The Terra USD stablecoin is also decentralized, but the algorithmic backing raises its risk.

Binance USD (BUSD) controls just under 10% of the stablecoin market but is only used on the Binance exchange.

Potential regulation could have a big impact on stablecoins and therefore is something investors need to monitor closely.

We may see regulatory action on stablecoins sooner rather than later, as Tether’s issues were discussed last July at a meeting of the President’s Working Group on Financial Markets.

That group happens to include the Treasury Secretary Janet Yellen as well as Fed Chair Jerome Powell, SEC Chair Gary Gensler, and CFTC Chair Rostin Behnam. And it’s clear that stablecoins are on their radar, as much if not more so than cryptocurrencies in general.

Just this month, SEC Chairman Gensler called for more SEC oversight of stablecoins. But for years, regulators have dragged their collective feet on crypto regulation, so it’s hard to say when we’ll see anything concrete.

Congress, on the other hand, appears on the verge of acting. In March, a “Stablecoin Transparency Act” was introduced in both the House and the Senate. The bill would create standards for the “quality of assets held in reserves” and require the companies that issue stablecoins to file reports to those reserves.

Some libertarian-minded corners of the crypto community object to any regulation. But that’s not realistic.

Let’s face it – Tether’s saga more than proves the need for stablecoin regulation.

Frankly, it would be good news for crypto investors if the Stablecoin Transparency Act becomes law. It would mitigate the worst of the risks of stablecoins and would serve to protect the average investor from some sort of meltdown.

At the end of the day, thoughtful regulation will give crypto the “stamp of approval” it needs to spur mass adoption. And we’re closer than ever to seeing that happen.

Bitcoin surged nearly 10% on the news, but what many folks may not realize is that it created a rare buying opportunity for two other coins that are better (and cheaper) options than Bitcoin. Each of these is projected to soar over 5,000% over the next five years. And my good friend and colleague Tom Gentile is revealing their names and symbols right here.