The Lightning Network is taking Bitcoin to a whole new level.

If you haven’t heard of it, that’s OK. Lightning is a “Layer 2” technology built on top of Bitcoin. Its purpose is to make Bitcoin payments faster and cheaper while increasing capacity (the number of transactions processed by the network).

While the Lightning Network isn’t new – work on it started in 2016 – it’s only been over the past year or so that it’s gained serious traction.

This matters for several reasons.

For one thing, Lightning is one more example disproving the idea pushed by critics that Bitcoin is an old, static technology. Bitcoin has had several upgrades over the years, including as Segwit in 2017 and Taproot last year.

More importantly, Lightning makes it possible for Bitcoin to function as a usable currency on a large scale. Bitcoin, as designed, works as a currency, but if too many people are using it transactions get backlogged and fees skyrocket. The Lightning Network makes it possible for large number of people to use Bitcoin as much as they want, with low fees and near-instant transactions. This is absolutely essential for the continuing rapid, mass adoption of Bitcoin.

Finally, a better, more usable Bitcoin adds to demand… which is absolutely essential for higher and higher Bitcoin prices.

Today I’m going to give a brief overview of how the Lightning Network works and go over the many signs of accelerating adoption.

What You Need to Know About the Lightning Network

Lightning’s roots go all the way back to Bitcoin creator Satoshi Nakamoto. Elements of the basic idea of a payment channel separate from the main network were part of the draft code for Bitcoin back in 2009.

But implementing off-chain payment channels was easier said than done. No one got serious about it until 2015, when two researchers, Thaddeus Dryja and Joseph Poon, published a whitepaper called “The Bitcoin Lightning Network.” Soon after that, developers started working on writing code to make Lightning a reality.

In January 2016 the Lightning Labs startup was founded, which ever since has been the primary engine behind development of the technology.

Here’s a brief outline of how it works:

Using smart contracts, Lightning participants set up payment channels with other participants. Some Bitcoin (any amount) is locked up in the channel to enable it. Once established, the two parties can transact instantly using the funds allocated to the channel.

This may seem very limiting until you realize that most participants maintain multiple payment channels with other people on the network. So, two people using the Lightning Network don’t necessarily need to have their own channel. The network can route the transaction through other channels until it reaches the destination party.

The results of the transactions in a payment channel gets sent to the Bitcoin blockchain only when the channel is closed. But while the channel remains open, it can conduct an unlimited number of transactions.

This is how Lightning adds almost unlimited scalability to Bitcoin. Instant payments at virtually no cost adds a powerful new use case to Bitcoin’s arsenal.

Compare that to credit cards, which charge merchants an “interchange fee” of between 1.5% and 3% on every transaction. And the merchants typically pass that fee on to consumers in the form of higher prices.

It’s an idea whose time has come…

Lightning Network Adoption Is Taking Off

When you think of the usefulness of any network, adoption is key. The more people using it, the more beneficial the network is for the users. That’s what people mean by the term “network effect.”

Think of a much older technology, such as the telephone. In its early days, if you were one of the few people who owned a telephone, it would have been fun but not particularly useful. But as more people obtained phones, the network effect kicked in. Telephones brought the unprecedented ability to have real-time discussions with others regardless of distance. 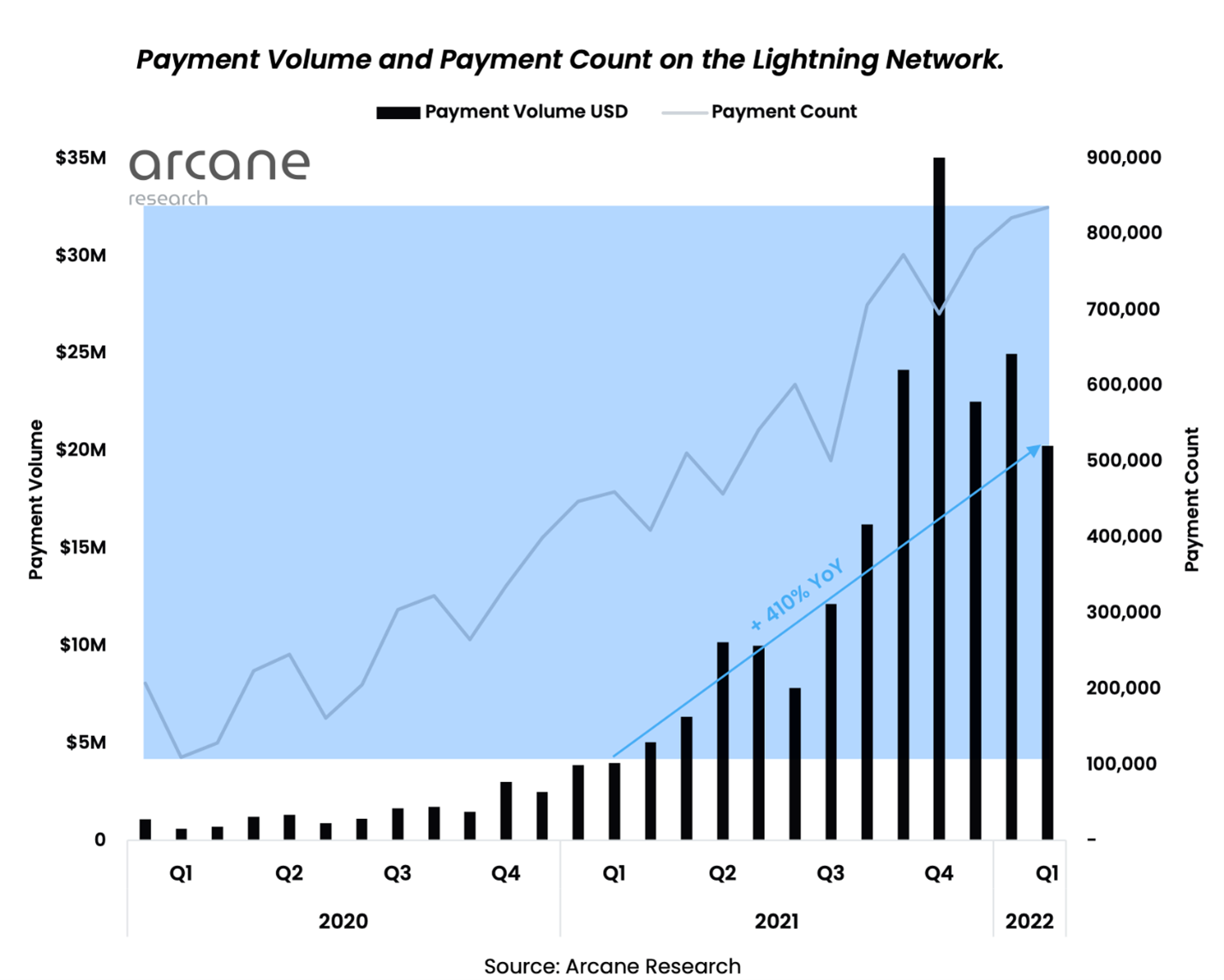 Another measure of Lightning’s growth, network capacity (the maximum amount of Bitcoin that can be sent through the network), has nearly quadrupled over the past year from a little over 1,000 BTC to close to 4,000 BTC.

As the Lightning Network becomes more capable, it has attracted the attention of a lot of payments companies.

This is key, because few individuals will seek out the technology. But if a company they have a relationship with simply offers Lightning as a feature, many are likely to use it.

With adoption by companies making Lightning available to millions of new users, the network effect to bound to accelerate even faster.

The impact of company adoption of Lightning technology cannot be overstated.

The Arcane report estimated that as of August of last year, just 100,000 people had access to the

Lightning Network. By March of this year, that number had exploded to 80 million people.

Take a look at these developments, most of which have happened in just the past few months:

Note that most of these events occurred after the 80 million figure cited above. Millions more have access to Lightning now, and that number will continue to rise rapidly.

And as more people use Lightning, more people will be using Bitcoin. That not only strengthens the case for Bitcoin, it creates a price catalyst by driving higher demand.

For investors, the accelerating growth of the Lightning Network has emerged as one of the most powerful arguments for owning at least a little Bitcoin.

Good day to you Sir! Hey, I just have a question about the: Lightning Network? If you could please let me know what the ticker is for Lightning, I would be very thankfukl! Truly! It should be good & a wild ride!!! Take care! Mr. Crum…

I am a money map press member

Dave
the AICI network is also growing at an exponential or shall we say
” LIGHTNING ” pace.