On May 10, LooksRare (LOOKS) staking rewards will be reduced through a “halving” process that typically lowers a cryptocurrency’s value.

If you’re currently staking LOOKS, it’s essential to know how this affects your investment.

The last time LOOKS rewards halved – dropping from almost 600% APR to between 100% and 150% APR in just a few months – the LOOKS token value fell from a high of $7 in mid-January to $1 by February.

After this next “halving,” its price is likely to take another hit as investors exit their positions. And depending on your personal investing goals, you may be thinking it’s time for you to exit, too – at least for the time being.

If you are ready to exit LOOKS, we’re making it easy with this step-by-step guide on how to unstake and collect your rewards.

There are two different rewards programs you could be staking LOOKS with:

By enrolling in the LOOKS Staking program, you can reduce your risk by earning LOOKS and WETH. (WETH is a more stable token than LOOKS.) The downside is that this program offers a lower APR.

By enrolling in the LOOKS Compounder, you take on more risk by receiving the more volatile LOOKS token, but at a higher APR with a bigger profit potential if the LOOKS price climbs again.

Chief Crypto Strategist Nick Black recommended investors consider staking in the LOOKS Staking pool to earn WETH and LOOKS. With the halving approaching, investors have the option to collect their WETH rewards and exiting their initial LOOKS position. However, investors can also continue staking the LOOKS rewards they earned from their initial investment in the compounder to collect a higher APR.

This way, investors won’t lose their profits if the LOOKS price drops after the “halving” while still using the free LOOKS they earned to set themselves up for a long-term gain.

Whether you want to exit your LOOKS position entirely or exit your initial position and keep staking your rewards, this step-by-step guide will show you how.

The program you chose will determine where to begin in the process. We’ll start with the LOOKS Staking program for people earning WETH and LOOKS.

LOOKS Staking: How to Collect LOOKS and WETH Rewards

Scroll past this section if you’re enrolled in the LOOKS compounder and are not collecting WETH rewards. 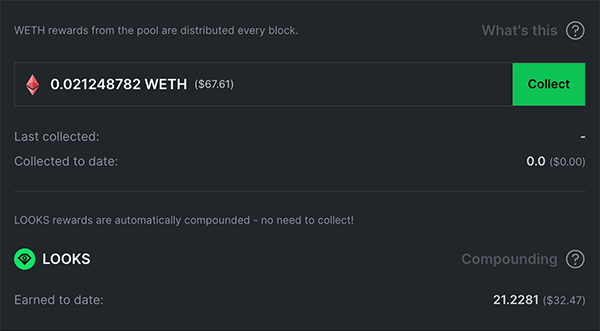 Editor’s Note: If you can view your rewards but do not see a green “Collect” button, that is because there are “collection windows” when your WETH can be collected. You will see a countdown of the hours until the next collection window which is when you can collect your WETH. 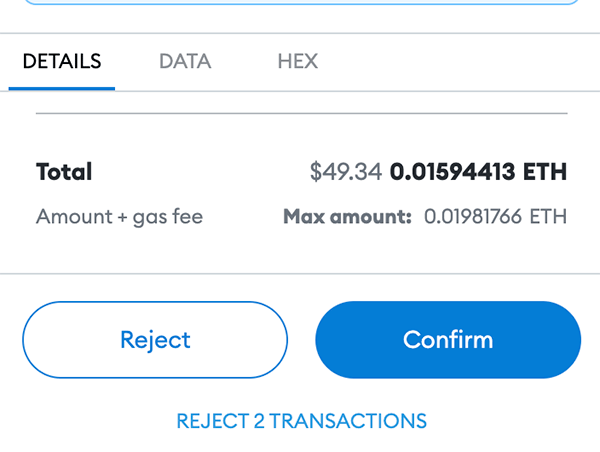 Editor’s Note: You will have to pay multiple gas fees in order to transfer your WETH to MetaMask and swap your LOOKS to ETH. 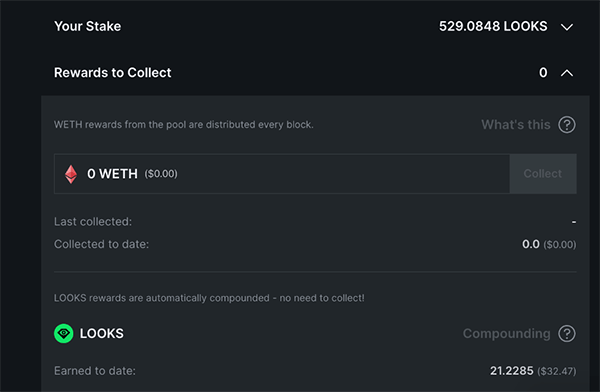 Now that you’ve collected your WETH rewards, it’s time to remove your LOOKS from the staking pool altogether.

LOOKS Compounder: How to Unstake LOOKS

This is your starting point if you are enrolled in the LOOKS Compounder.

Skip the step three if you want to exit your position entirely. If you want to leave the free LOOKS you’ve already earned in the staking pool, keep reading. 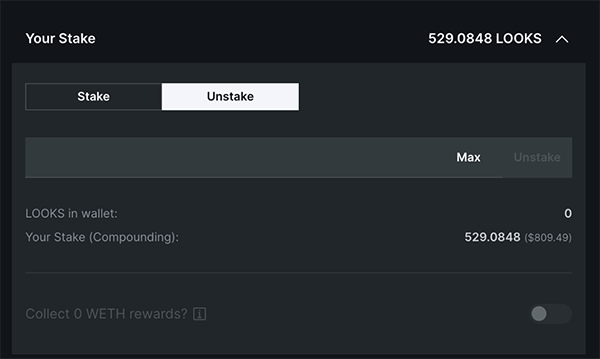 Now that you’ve unstaked your LOOKS, it’s time to remove it from the platform altogether.

Now that you’ve unstaked your LOOKS and collected your rewards, it’s time to swap your LOOKS into Ethereum (ETH) or another coin of your choice using Uniswap.

By swapping your LOOKS into a different coin, preferably one more stable like ETH or Bitcoin (BTC), you can decrease your risk of losing money if and when LOOKS drops without cashing out your crypto. 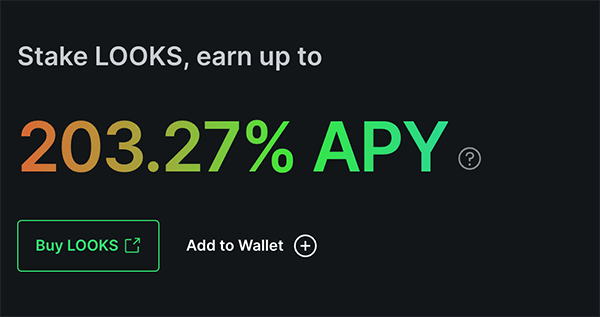 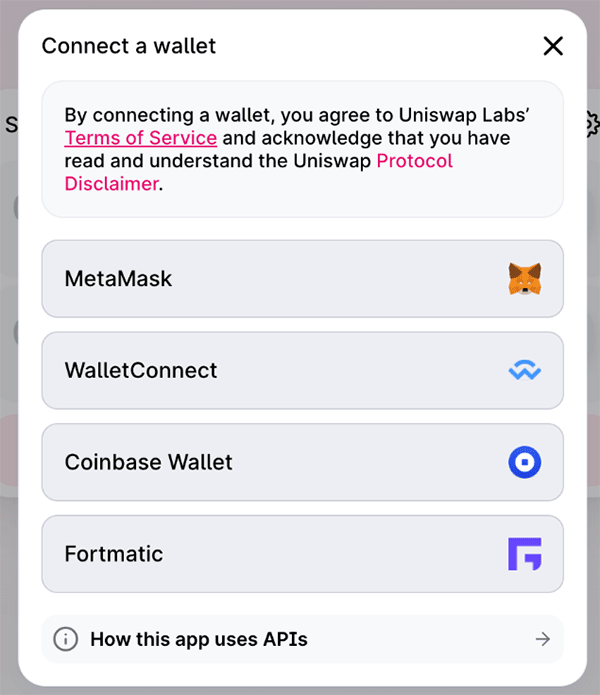 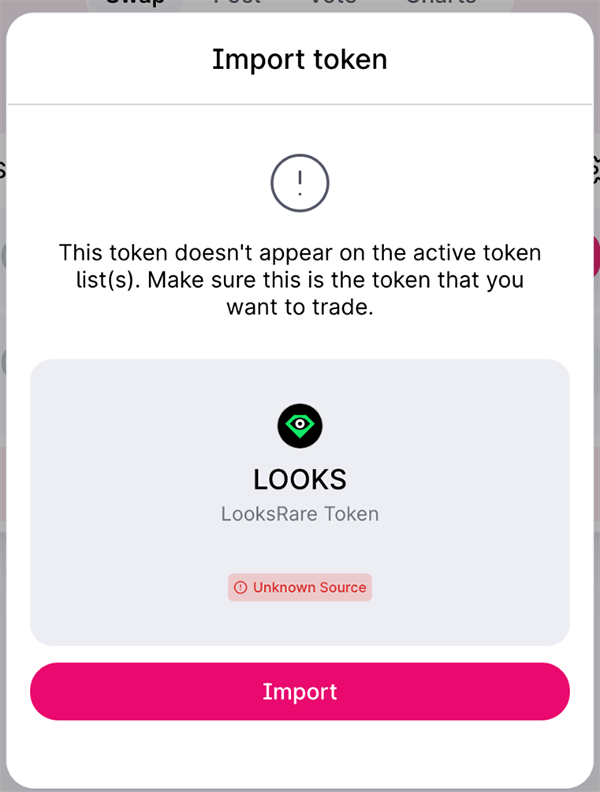 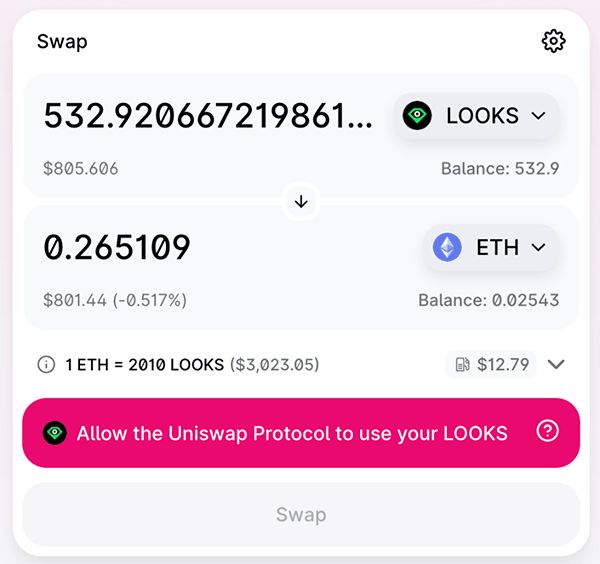 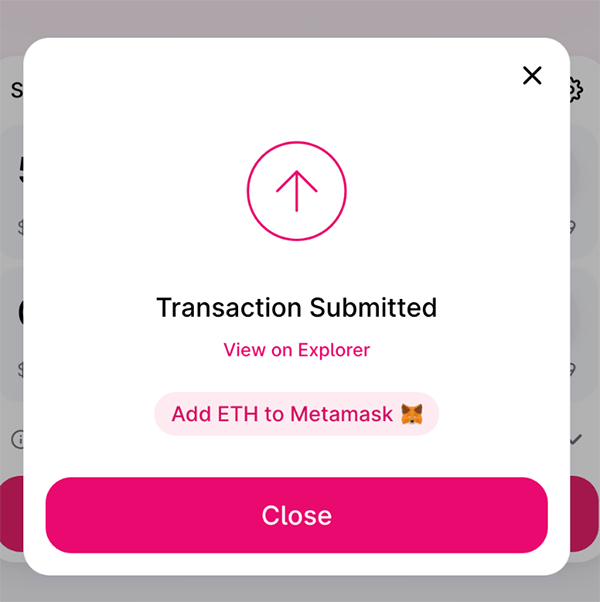 You’ve now officially exited your LOOKS position and swapped it back into another coin of your choosing, which is yours to do with as you choose, whether it be sell for a profit or stake somewhere else.

LOOKS made for a great opportunity because of its high APR but also because it’s a good crypto to own with a bright future. LooksRare is a non-fungible token (NFT) platform that could disrupt the market currently dominated by platforms like OpenSea and Nifty Gateway.

And we don’t plan on staying out of LooksRare forever. Though we can’t predict the future, Nick believes LOOKS price will drop to a beautiful re-entry point where you could buy in again for a discount.

To your investing success,