I talk a lot about crypto as an investment because we’re here to build wealth. Buying cryptos low and selling them high is how we do that, and technology (one of my five big “Ts”) plays a huge rule in making that happen.

And so, it’s technology we need to be thinking about to understand how we’re going to deal with the current crypto winter.

Crypto prices might go down on any given day, but nobody can “un-invent” anything. Once the toothpaste is out of the tube, there’s no getting it back in. In other words, once the technology behind a crypto is validated and adoption begins, its price “floor” will get higher and higher.

That’s why the technology underlying any given crypto is such an important part of my 5 Ts system. “Technology,” “Timing” and “Why Token?” are all about what a crypto does in the first place.

If a cryptocurrency solves a real, serious problem, or satisfies an unmet need, people are going to start using it, just like they getting around in cars instead of carriages, or shopping online instead of malls.

That accelerating adoption is going to lead to really big profits for investors. We’re already well on the way, in fact. Here’s what I mean.

According to Bitcoinist, a recent report from Boston Consulting Group and others shows cryptocurrency following an adoption trajectory that’s eerily close to the curve the Internet itself followed back in the 1990s. 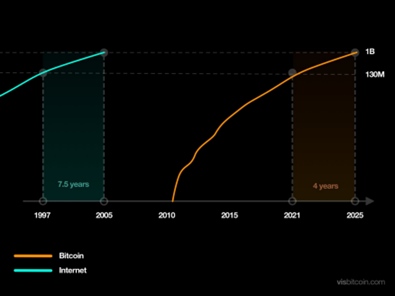 I mean, it’s so similar that some might think it’s creepy. Not me, though. That’s how tech adoption works – that the trend lines match up so well is just an extra bit of poetry. They show cryptocurrency having more users today than the internet did in 1998. It took about seven more years for the Internet to go on to hit 1 billion users in 2005.

If the trajectories stay similar, and there’s no reason to think they won’t, the report expects crypto to hit that same 1 billion mark by 2030. 8 years isn’t a very long time when we’re talking about a billion people. Earth today has just short of 8 billion people on it.

Put another way, one out of every eight human beings will likely use crypto by 2030. That’s out of everybody from Alaska to Australia, and from Korea to Chile.

And the thing is, you don’t actually need that many users, compared to the total human population, to generate vast amounts of money.

Today, Twitter has about 200 million daily active users – less than 3% of the population – and it’s worth almost $30 billion (or, I dunno, $44 billion if you’re Elon Musk). That’s because Twitter is essentially a giant thought-leader. It looms large in the pop culture and many people’s minds. It’s where trends are defined, where important people make pronouncements – often pointless stuff at the end of the day. Nevertheless, much of what’s said there is read and digested by an immense audience. You couldn’t ask for a better advertising delivery vehicle, hence its 11-figure value.

Like the Internet, cryptocurrency isn’t a single product or service rather, it’s an entire new ecosystem for projects. So many people get involved with crypto because crypto can be anything to anybody.

A person could pass up digital gold like Bitcoin still get involved with, say, Basic Attention Token (BAT) just to get some less obnoxious ads when they watch videos online. They might feel passionately about doing good in some of the world’s poorest, most isolated places, so they back Cardano (ADA). With the inherent flexibility of crypto, I wouldn’t be surprised if we hit that billion-user mark well before 2030.

In fact, I’m not just “expecting” it – I’ve staked my total net worth on it.

And I feel pretty good about it. We’re rapidly reaching “hyperadoption,” when crypto and the blockchain will be part of the mainstream economy. There’s a lot of money to be made between now and then.

It feels good to know that quality assets still have value even when the market is lower on prices, like now.
I have a question about determining the levels of different coins. It’s obvious on Level 1’s , sometimes difficult on which are Level 2’s or Web 3’s. Is there a chart for that anywhere?
At first I bought into to many coins, I am now trying to focus on a smaller number & trade out of the extra without losing to much of initial investment. Also trying to separate into the percentages you gave us in breakdown of our portfolios.
Thanks for the frequent info letters you provide!!

The other day I watched a video with you in it and you stated you expect Solana to go to zero. Do you still believe that.

If they do not make any major changes.

Have I missed any updates on Harmony One? Is this still a buy or hold? The Harmony One Team has sent a letter to holders saying they didn’t agree to the 2 top Founders’ decision for reimbursing victims by minting almost 5 billion ONE. A Harmony ONE Mod on Reddit just called it quits. Most of the comments I read by community members say they have sold their holdings and the project has failed.

They may be building during this bear market like many other projects.

Thank you for creating AICI as a medium to reach out, educate, empower and give Americans investment hope. This is very exciting because, through AICI, Crypto Investing knowledge and techniques will be delivered to door steps of members.